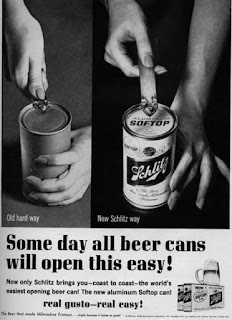 This ad was pretty hopeful. Some day ALL beer cans will open as easy as the new Schlitz soft aluminum cans. The old cans needed a can opener to get to the amber nectar within but the new cans can be easily opened simply with...... a can opener. Progress baby......progress. No different than now, back in the 40s people would look to medical professionals for advice on how be the best they could be. Since more doctors preferred Camels, naturally the smart thing for a smoker to do was to switch to Camels as well. You'd have to be a complete idiot to smoke a brand not endorsed by a dapper doctor who smokes in his office. Been a long time since we've seen an ashtray in an examination room. 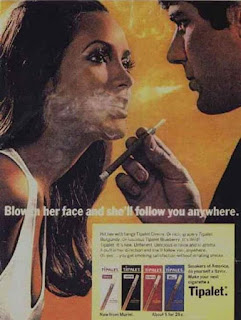 While we're on the subject of smoking, this ad also offered advice but this time it's tips on how to be irresistible to women. Apparently if you blow in her face, shell follow you anywhere. Oh she'll follow you alright. That ranks right up there with making her pay for her own dinner when on a date or hitting on her girlfriend right in front of her. Seriously......try it, girls love that. 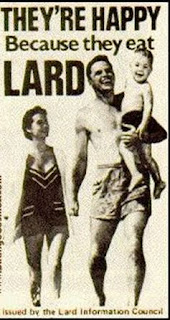 I'm fairly sure the follow-up ad was "They're dead because they ate lard." I'm not sure what's more sad, the fact you owe your happiness in life to rendered pig fat or that people actually worked for an organization called the Lard Information Council. I'm guessing their office has re-enforced chairs....... just sayin'. 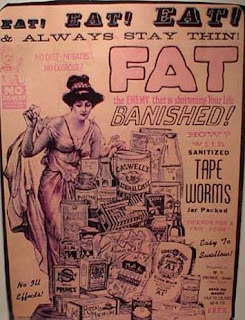 So it appears the secret to staying thin was discovered way back in the 30s but has been suppressed all these decades by the evil pharmaceuticals making billions on all those diet pills and potions when all you really need to stay trim and sexy are tape worms. Now with no ill effects and easy to swallow ! At least they had the decency to sanitize them before selling them to the public.