In part 1 of this series, we looked at some examples of candies that you may have grew up with in the 70s and 80s that hold a sweet memory in your mind of carefree and happier times when getting a sugar high after school was paramount on your things to do list. The reality is some of these treats were actually kind of disgusting but it took years of maturing before coming to that conclusion. Not all of it was that bad though. Here's a look at some more of our favorite sugar fix delivery systems. 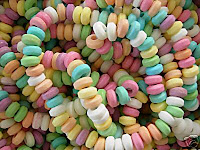 Candy Necklaces - Candy that allowed for sharing was always fun. These candy bracelets and necklaces allowed you to share with your nearest and dearest friends and make you the most popular kid in the schoolyard. Your friends would line up for a chance to chew off a sweet morsel off the string hanging around your neck. The wouldn't even mind or care that the string of candy has been hanging around your neck all day on a hot and humid summer day while you played soccer. Yummy. 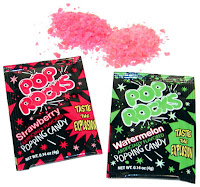 Pop Rocks - More than likely you remember the first time you experienced pop rocks. Your were probably unsuspecting of what your buddy just handed you as you poured a little in your mouth only to have your eyes bug a bit as you experienced the weird tingling / burning sensation on your tongue. Shortly after your first experience came your first dare to see how many packs you could handle in your mouth at once. Hours later, your sense of taste would return. 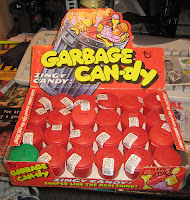 Garbage Candy - You have to wonder about the marketing meeting that took place while they were coming up with this candy.  Trash shaped candy pieces in a garbage pail is either a flash of genius or the result of being awake way too long with a cocktail of controlled substances in the system.  Having said that, these were pretty popular back in the day. You couldn't get kids to take out the garbage without grumbling but they'd have no problem scarfing down trash shaped candy by the can full.

Freshen-Up - This gum was pretty innovative at the time. A cube shaped gum with a liquid flavor center. This gum suffered the fate of many gimmicky or novelty gums in that they' turn to cardboard in no time but it was a cool concept. One problem was it didn't store well in your jeans.

Candy Buttons - Another classic candy made for sharing. These little flavor dots were cool and came in lots of flavors but the cool thing was how easy they were to store. Just fold them up and slip them in your pocket.