March 22, 2010
Ever find yourself getting upset that your current mp3 player can only hold 1200 songs or that the battery is only good for about three days on a single charge? I can't say that I feel your pain. Reason is I grew up before we starting storing our songs on memory chips. Back in the 70s, 80s and better part of the 90s, society had to get by with the cassette tape.

This miracle that followed the 8-track and reel to reel concept allowed people to record their vinyl albums and put only the songs they really wanted all onto one handy, dandy portable medium just slightly larger than a cigarette pack. That was pretty tiny in those days. You could record up to 120 minutes of your favorite tunes on one single cassette. It allowed you to create the perfect blend of tunes to keep that party going or to offer up as a token of your love to that special someone with groovy titles like, "Midnight Love Mix Pt1" or "Fantasy Voyage of Love".
With the proliferation of audio cassettes came the boom box craze that saw all kinds of spikes in battery usage and weird sights like the one below. All you needed to be cool in the 80s was a big ass radio. Well.... it was a good start. 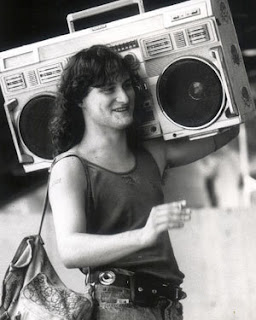 Eventually the good folks at Sony realized that a personal sized cassette player would use less batteries, be easier to carry and be less of an annoyance in your daily commute. The Sony Walkman was born and ushered in a whole new category in the electronics stores - the personal music player. Since then the quest to go smaller and pack more music per square inch has never stopped and it changed not only how we listen to music but how it's marketing, sold and distributed.
For a more detailed nostalgic look at the audio cassette in society, click the cool Walkman below: 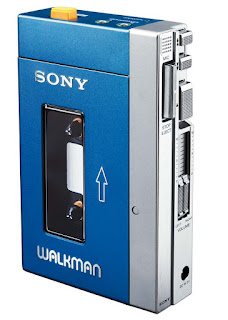