When Smoking Was Great

August 01, 2009
There was a time when smoking wasn't the social taboo it is today. Smoking was something people did on planes, in doctor's waiting rooms, in theatres, in their cars and pretty much everywhere else until we came to the shocking realization that smoking is actually bad for you ! Who knew !?!? You'd think that sucking carcinogenic smoke directly into your lungs would actually be beneficial and something to be encouraged. Well at least that's what they thought in the '60s and '70s as witnessed in the following classic cigarette ads.

This ad is wrong on so many levels. Using an innocent baby to sell cigarettes is one thing but to try and make you feel guilty that you don't have the best of everything like this kid's dad since you don't smoke Marlboros is really a shot below the smoke filled lungs. At least it's never too late to experience the "Miracle of Marlboro" and never feel over-smoked (as opposed to under smoked I guess).
Chesterfield 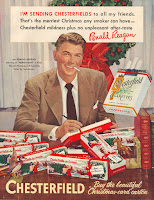 This ad featuring former President Ronald Reagan, really only proves one of two things. Either Ronnie only associated with people who smoked or he was the worst Christmas shopper in history. Although, it's nice to finally see a cigarette that doesn't leave an unpleasant after-taste. Now instead of popping a Tic Tac or Menthos before an interview, have a quick smoke to freshen your breath. Chesterfield Cigarettes - the New Fresh Maker ! 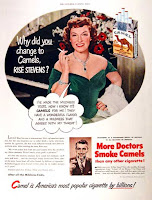 You really can't go wrong with Camel cigarettes when you realize that more doctors smoke Camels than any other cigarette brand. What an awesome endorsement. Obviously it's the cigarette brand a doctor would recommend if he finds you're not getting enough tar.

This commercial aired back in 1960 when Winston cigarettes sponsored the first season of The Flintstones on ABC. Back then the show was geared towards an adult audience much in the same way that Family Guy is geared towards an adult audience. Trying to air an ad like this today would certainly prompt a few lawsuits and a few thousand complaints. Although I gotta say Wilma looked pretty sexy with that cigarette.