August 05, 2009
We've always had a love affair with our cars. Especially if it's your first car, no attention to detail is too great to try and make this symbol of freedom your very own. We spend countless hours washing and detailing them and hard earned money on accessories to try and put our mark on them and make them not only unique, but the envy of the neighbourhood.

Back in the day, these accessories had to include:
Foxtail 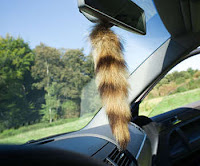 What better symbol of machismo could you possibly hang off the rearview mirror (other than a garter belt you caught at your cousin's wedding) to show you were a virile, hot stud on the prowl than a genuine foxtail? The bushier the better. Even though it impeded your view of the street and the dangers that lurked just beyond your dash, it showed you were an animal and an easy target for PETA.
Fuzzy Dice 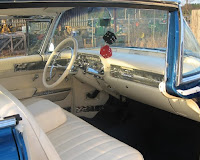 If you were more of the gambling risk taker sort, you could always opt for a neat set of fuzzy dice. It would impede your view just as well as a foxtail but these came in all sorts of colors and designs and allowed you to really show some personality.......... or that you liked fuzzy things.
Dashboard Hula Girl 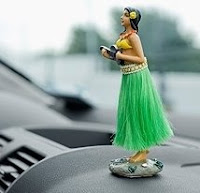 Although I've got one on my monitor as we speak, I never understood why people sported one of these on their dashboard. What message did it really give to other motorists? You liked girls in grass skirts? You were into Don Ho? You'd rather be surfin'? You never got over your freakish fetish for your sister's Barbies? 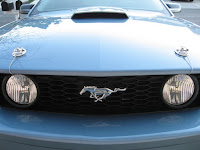 Although a must have accessory for any street legal machine that had the muscle to do damage on a race track, it always cracked me up when you'd see them show up on a stock Cavalier or Hyundai Pony right off the showroom floor.

As exotic sport car makers kept introducing us to sexier machines, the average guy longed to try to mimic the same effect on their own beasts. So maybe you couldn't afford a 1967 Lambo Miura or a Ferrari 312P, atleast you could hang plastic covers on your Firebird or Mustang. It's close.........right? (sniff....tear....)
Side Pipe Exhaust

Undeniably a bad ass accessory on a vintage muscle car or sweet street rod. Paired with a set of headers, it would give you the throaty rumble that announced to the world you had a car that meant business. It looked nasty and it sounded mean. Problem was that the same people that would put hood locks on a VW Rabbit would also put side pipes on a 1985 Crown Victoria. Just not the same effect.