It's amazing how far we've come with video games and home video game platforms. When you consider that the average home gmaing console has more computing power than NASA had during the Apollo missions, it really puts things in perspective on how far we've come from the early days of Pong.

I know I've spent countless hours in arcades back in the day spending a small fortune on quarters to try and just get to the next level of the latest and greatest game. Even though you knew they were making it more difficult to suck more quarters out of you - you still fed those babies like your life depended on it. When home computers and gaming systems came along, it allowed you to play in the comfort of your own home without having to constantly feed more quarters. Having said that, you had to spend a small fortune to keep up with the technology to be able to play the latest and greatest games.

Game consoles came along and we were hooked on crappy graphics for the longest time until eventually you had games that rivalled and beat out the PC games. They were easier to play than using a PC keyboard but you killed your fingers and lost hours of sleep just trying to beat the damn thing or get to the next elusive level. 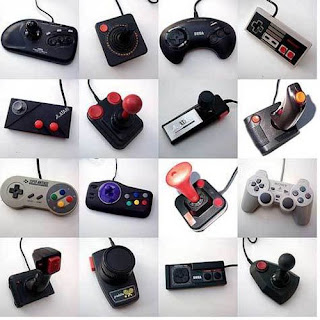 One thing I have noticed though is that games in the old days like Wolf 3D or Doom were quick loading games that allowed you to jump in and start blasting. Simpler games that although challenging, didn't require weeks of training or learning key combinations. I find the older I get, the more I like and miss the older games. I guess it's whatever you grew up with that will remain near and dear to your heart, but I think we've all been there when it comes to sitting down to play a quick game only to have a slow loading PC just kill the will to play anything or wish that photon balster in the gam was real so you could actually unleash your wrath on the wretched PC!

Click here to play Retro arcade games from the 80's.