Cars That Would Have Saved Pontiac If They Still Built Them

July 23, 2009
With the recent collapse of the North American auto industry, there have been more than one casualty and the jury is still out on if there are any more to come. One of the biggest brands to bite the dust was one of the former pearls on GM's crown - Pontiac.

Although it can be argued that the Pontiac laid many a turd in recent years like the much hated Aztek which although was much more feature rich than many other SUVs in it's price range, was just plain ugly. Other cars in recent years that brought on universal yawns from Pontiac included the Bonneville, the G3 (they build excitement?!?!) and the Montana. All had promise but all had severe short comings that made the Pontiac one of the brands to hit the chopping block.

Even great new cars like the G8 GXP, the 2010 G8 ST which would have heralded the return of the El Camino type car/truck hybrid, and the Solstice GXP Coupe all had the earmarks of what once made Pontiac great but it was too little too late.

While many car companies were taking their cues from their vintage models, Pontiac never really took advantage of their rich heritage to really "Build Excitement". Let's take a look at some of the models that could have likely jump started Pontiac's sales if they followed the lead of companies like Ford, Dodge, Volkswagen, and Chrysler to come up with new cars with that retro look. 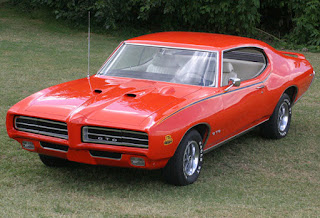 With the success of the first generation, the second generation GTO picked up right were it left off with a much more robust and modern fastback styling and massive 400ci V8's rated all the way up to 370 HP. The Judge package offered wild color options with matching decals, a Ram Air hood, spoilers and a T-handle Hurst shifter. There was nothing you could tell this judge. 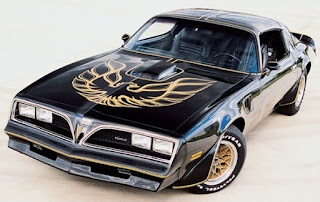 Ahhh the flaming chicken. Back in the late 70s and early 80s, you wanted a '78 Pontiac Trans AM. Not just any Trans AM, you wanted the black and gold "Bandit" color scheme Trans AM with a T-roof. This model year had a few tweaks that brought the top-line V8 to 220 HP. Not bad for those days. You wanted one. You also wanted to grow a mustache like Burt Reynolds and find a woman like Sally Field. 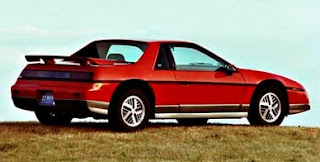 Admit it, you made fun of the Fiero when it was around. The obvious play on the name which labelled it the poor man's Ferrari was the butt of many a joke. For the most part though, it was a joke initially. It was strapped to a sluggish 2.5-liter "Iron Duke" four-cylinder engine and the suspension was based on a Citation for Pete's sake. The Fiero was easy pickings for the haters. By 1988 however, GM snapped out of it and gave the car a proper suspension, head turning styling and considerable improvements to both the four-cylinder and V6 engines. Once it became respectable and sought after, it was scrapped. 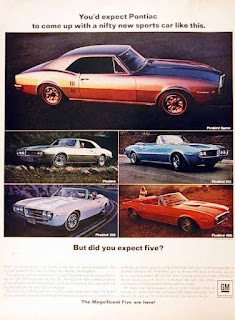 The battle of the pony cars was in full effect between Ford and Chevy and the engineers at Pontiac were paying attention. The 1967 Firebird debuted with more even weight distribution for better handling, and traction bars to offset the infamous single-leaf rear springs. This move prevented spring twist under hard acceleration. Five models were offered in both convertible and hard tops with engine sizes ranging from 230ci to a whopping 400ci V-8 that produced 325 hp.
1964 Pontiac GTO 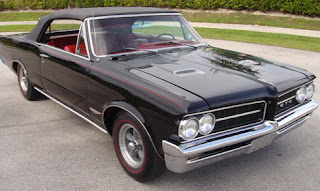 The 1964 Pontiac GTO was the car that sparked the original muscle car wars. Though it can be argued that this was just a supped up LeMans, but the 325 HP, 389 cubic inch V8 with Carter four-barrel carbs, a dual exhaust and a three-speed Hurst manual transmission made you king of the hill (or street) pretty easily. It sold three times the projected annual sales showing yet again that marketers really didn't know how to read a demographic and plan accordingly and also that this car was destined to be a classic.

So there you have it. This list is by no means complete. Great cars like the Grand Prix, Bonneville and even the Grand AM helped to keep the brand going all these years but it would have been great to see an effort or Pontiac's part to bring some of the retro lines back in to their late model cars a bit sooner. Who knows, it may have made a difference. Bottom line is classic Pontiac car owners are enjoying a bittersweet moment. The brand is gone but that just makes the machine in their garage a bit more valuable.